Scarlett was doing so much better! She was on Nasal Cannula and that light at the end of the tunnel which seemed unreachable was finally coming into focus.  It was as if the dust from a sandstorm had finally settled down and we could find our way home.

I remember as I was leaving Scarlett’s pod one day, I ran into one of her doctors. Remember the one with the pretty blue eyes? Haha. She stopped me and we chatted for a bit about how well Scarlett was doing and how unbelievable it was that we’d come so far. She then shared the best news I had ever heard! She said, “Don’t be surprised if we tell you within the next week or two that you’ll be going home.” My heart literally started to race with excitement! The rollercoaster was finally coming to an end! I remember walking away with tears in my eyes and a huge smile on my face. I couldn’t wait to share the good news with everyone!

I should’ve known better. In all of the excitement, I forgot that with each step forward it was usually followed by two steps back. It was a dance and Scarlett was leading.

Although Scarlett was doing really well, the amount of oxygen she still needed to support her was too great for the doctors to feel comfortable enough to send her home. It was time to play another game of “let’s try to take Scarlett’s oxygen away without her noticing.” It was FUN! (not really) Every other day they tried to lower her settings and somedays she was completely okay with it; it didn’t seem to phase her at all. Other days though…even the slightest change would throw her off and she just HAD to have that extra push to help her out. (I’m telling you, she is a DIVA!)

In the meantime, however, there were a lot of other things to focus on. Think of it as a “NICU discharge checklist” and we had to check each item off one by one.

As Scarlett’s lungs continued to grow stronger, we worked with her on other important areas of development. Every day an Occupational Therapist would come to the unit and work with her. Because she had spent so much time (basically the first four months of her life) laying in a bed the majority of the time, her body was very stiff and not used to a lot of movement. She had to stretch and be given massages (lucky!) in order to help loosen up her muscles. They needed to make sure that her whole body was “connecting the dots” and could do the simple things a body is supposed to do. For example, things like following sounds and turning her head from side to side, or putting her feet down when you held her up. Simple things like that. Most parents wouldn’t think twice about noticing that kind of stuff with their baby. It was a really interesting learning experience, to say the least. I had no idea what occupational therapy was or just how important it is, especially for pre-term babies.

Scarlett also had a speech therapist. (say whaaat!?) Yeah I know, it’s funny to think of a “newborn” needing a speech therapist – but she did. Every day an ST would also visit the unit and watch/help me feed Scarlett. Preemies basically have to play a game of “catch up” for the first couple of years of their lives. Up until now, Scarlett had no idea she was being fed, food would just magically appear in her stomach and that was all that mattered! So imagine the shock it was to her when she had to actually work in order to get food from a bottle! This is where the Speech Therapist came into play.  She would watch me feed Scarlett and as I mentioned the last time when Scarlett would eat, she would stick her tongue out. This not only made it hard to get milk out of the nipple but it also wore her down pretty quickly. One of the “requirements” we had to check off the list in order to go home was to make sure that she was capable of bottle feeding. So we did some facial massages, lip stretches and we had to offer chin support during feedings. It took some time but she eventually got it down. 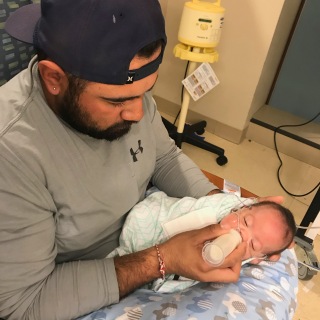 I’m telling you, having a preemie is seriously a lot of work. I have learned A TON about different areas of infant/child development. I knew parenting was going to be difficult and a learning experience in itself but having Scarlett is a different kind of parenthood.

While she focused on learning to bottle feed, and her lungs continued to grow there were a few other things on the list that needed to be double and tripled checked before given the a-okay to go home.

For instance, hearing and eye exams. Preemies, especially micro-preemies, are at risk for both ROP which can cause blindness and hearing loss, due not only to being born prematurely but also from needing a high amount of oxygen for a long period of time. By that point, I can’t tell you how many eye exams Scarlett had done. Only that they were very scary to watch and I hated that she had to go through yet ANOTHER traumatic event. They would dilate her eyes (which always seemed to take a long time for her) and put numbing drops in them. The ophthalmologist would then use this weird little spacer-type tool to force Scarletts eyes open (which was the hard part to watch, it looked so painful and her cries broke my heart) and examine her eyes one at a time.

As much as I hated that she had to go through that, I knew they were only doing what was best for her.  Keeping a close watch on her eye development was extremely important. I know I’ve said it before, but Scarlett really and truly is a miracle. She was only diagnosed with a mild case of ROP and for her being on as much oxygen as she was, for as LONG as she was…its a miracle she has never had to have laser surgery or any other kind of treatment to correct it. (I’m not sure how rare that is but from my understanding that’s pretty amazing.) Her vision has slowly improved and even to this day, her eyes are doing really well. (We see the ophthalmologist again soon, so I will have an in-depth update for you later. I’ll talk more about it once I share our “Life After NICU” story.)

Before babies are discharged from the hospital (I’m not sure if this standard for EVERY baby, preemie or not) but Scarlett had to be given a hearing test. This was another “mile marker” for us. They usually don’t do those until just before they send you home. So I was really excited when they told me they had requested her hearing test to be done.

Unfortunately… She failed on her left side. They tested her a couple of different times and each time they had, her hearing in her left ear either didn’t pass or the results would read “halfway” but it still wasn’t a good enough result to consider it as passing. (I know that must sound confusing – but unless you are an audiologist its hard to explain.) I remember being a little worried about it. They could only test her so many times before she had to be referred to an audiologist outside of the hospital – once we go home.

Honestly, after all that, my little girl had endured… I remember thanking God for allowing her to be here with us. Despite the fact that hearing loss is a disability that would affect her life forever, it wasn’t the worse thing she could have walked away with and she would never have known any different. I told myself that if after all of this if she was deaf in one ear, it would be 100% okay. Because she is such a testament to God’s work. Look at how much she has overcome!

You would think that after ALL of the things I just shared with you that was the end of our checklist. But I am sorry to tell you that our NICU journey doesn’t end here.

Hang in there, I know it feels like it’s taking forever to get to our “happy ending” right?

Imagine LIVING through it. 😉

This site uses Akismet to reduce spam. Learn how your comment data is processed.